On a day with an azure blue sky and clouds puffy white with the stuff dreams are made of, a small group gathered at what’s left of the Charlotte train station. 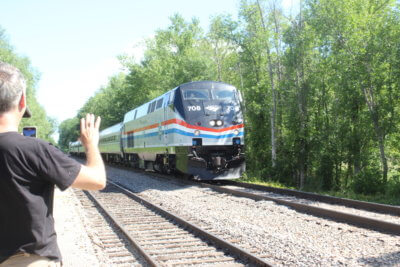 Photo by Scooter MacMillan. Rich Ahrens records video of the first passenger train through Charlotte in 70 years and waves as the engineer waves back.

They had come shortly after 10 a.m. on Friday, July 29, to watch as, what for many years was folklore from long ago, whizzed through town on its way to New York City.

Shortly after 10:30 a.m., the train aficionados’ wait was rewarded when the long-held dream of a train through town became incarnate as the sleek, silver Ethan Allen Express sped by, just a bit louder than a stage whisper.

Reg and Janine Garen had come out to see the first train since 1953, or almost 70 years, to run through Charlotte.

The Ethan Allen Express has been running passenger train service between Rutland and New York since 1996 and plans for extending service to Burlington have been in the works since then, the Agency of Transportation said in a release.

There was the Champlain Flyer, but that was just between Charlotte and Burlington. It ran for a bit more than two years, from December 2000 through February 2003. A project championed by Howard Dean when he was governor, the Champlain Flyer ran as a commuter train to help with travel while Route 7 was being built, Reg Garen said.

That train was discontinued on Feb. 28, 2003, just after Jim Douglas took over as Vermont governor, even though all of the contracts had been paid through the end of the year, according to Wikipedia.

Reg Garen said he had fond memories of taking grandchildren into Burlington on the Champlain Flyer — and of the cost — just a $1 each way.

The warnings of the Agency of Transportation’s Operation Lifesaver Vermont about how silent the train is have been on target: Stay off the tracks because this train can be on you before you hear it.

The train is much quieter than the trains of yore with no clickety-clack as the wheels hit different sections of the track. Now, the rails are welded in solid sections that may be more than a quarter mile long with no segments.

The train left Burlington about 10:10 a.m. Friday after a big fanfare that started about 8:30 a.m. More than 15 Burlington and state luminaries from Vermont and New York were joined by “avant funk” band Soule Monde in sending off the Ethan Allen Express on its inaugural voyage with passengers.

“I am thrilled to welcome back train service from New York to Burlington’s downtown train station for the first time since 1953,” Mayor Miro Weinberger told the celebrants in the Queen City. “This new Amtrak service fills a 70-year-old city void, will give a boost to our economic recovery at a critical time and will give travelers a lower-carbon connection to New York and the rest of the Amtrak system.”

Rep. Peter Welch called the occasion “a historic and exciting moment for Vermont.”

Officials from the Vermont Agency of Transportation said there were at least 300 people at the celebration in Burlington. The train was celebrated by 200 in Vergennes, 150 in Middlebury, 75 in Rutland and 25 in Castleton.

Not to mention the seven in Charlotte. Among whom was Rich Ahrens, who said he grew up an avid model railroader and has always loved the nostalgia surrounding trains. He is thankful that Burlington’s Union Station survived seven decades without passenger service.

He said it is unfortunate that rail service is so efficient around the world but has been shunned in the United States.

“I’m particularly excited at the prospect of continuing the rail service up to Montreal and know my wife and I would take advantage of both its convenience and scenic enjoyment when it comes to fruition,” Ahrens said. “Meantime, hearing the two additional distant train horns daily in Charlotte shall suffice.”

The new route did hit one snag in Albany, N.Y., where Amtrak officials learned the day before service started there was a danger from a crumbling warehouse next to the tracks. Passengers were bused around this hazard, but it didn’t seem to mess up the schedule.

On Wednesday, the train was predicted to arrive in New York 11 minutes ahead of schedule. Officials with the Agency of Transportation did not know when the issue in Albany will be resolved.

Watch the video by Rich Ahrens of the train coming in to Charlotte.