In a Sept. 14 letter addressed to Backyard Bistro Gemini Properties, LLC, Pelletier warned building owners Debra Kassabian and Mike Dunbar and restaurateurs Adam and Jill Spell they were in violation of the town’s land use regulations. Offenses listed in the notice included hosting large events on the Route 7 property, allowing unauthorized parking, and adding gravel to an area identified as a Class 2 wetland buffer without proper permits.

“The number of seats inside and outside the Backyard Bistro restaurant exceeds the 26-seat limit established by the Certificate of Occupancy,” Pelletier wrote. “Furthermore, for the event held at Backyard Bistro on Sept. 4 … there were roughly 80 tickets sold, and it was apparent that there were at least 50 seats set up outside and more than 30 seats set up under the tent.” 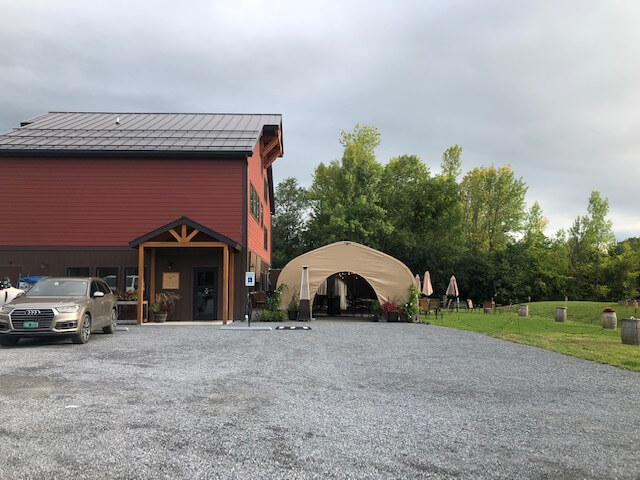 Backyard Bistro located at The Charlotte Crossing in Charlotte. Photo by Mara Brooks

This is not the first time Charlotte’s Crossing has locked horns with the town over land use regulations. In August of last year, building owners Debra Kassabian and Mike Dunbar were told to stop hosting food trucks at the property because they were in violation of seven different regulations.

When reached by The News, building owner Debra Kassabian said Backyard Bistro did not have a comment “yet” but they were working on a collective response.

“It’s been a very busy weekend for all of us,” she wrote.

It is not known if the restaurant will comply with Pelletier’s demand to discontinue the alleged violations. Failure to do so could result in fines of up to $200 per day after a seven-day grace period, Pelletier wrote.

Pelletier gave the restaurant owners until Sept. 30 to remove the unauthorized gravel from the property.

Backyard Bistro has 15 days from the date of the letter to appeal the notice with the Zoning Board of Adjustment.