Although it might seem so, it doesn’t always go that they pave paradise and put up a parking lot.

At least not at the Charlotte Library where they’ve unpaved part of a parking lot — an old driveway to be exact — and tried to put up … well if not a little bit of paradise … a bit of an improvement to water quality downstream of the library.

The library and the Lewis Creek Association have been working on an area to the east side of the building where a former driveway has been taken up. A rain garden and other stormwater runoff mitigation practices have been installed in that area.

Stormwater historically ran off from the driveway and building and flowed toward Thorp Brook, where water quality sampling has found high nutrient and sediment levels, which affect both the stream’s and Lake Champlain’s water quality.

At the library, multiple optimal conservation practices were installed to mitigate stormwater runoff at the site. 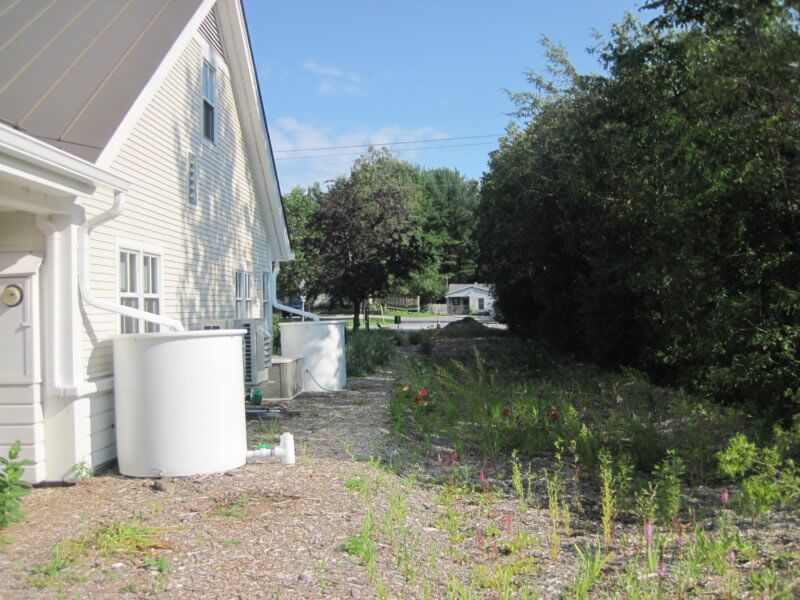 Photo contributed. A rain garden was built and rain barrels were added where the former driveway was.

The Lewis Creek Association participated in the planning of the expansion of the library and concepts it advocated for were incorporated into the landscape design of the old driveway into a rain garden or “a bio-retention area” intended “to reduce impervious surface and increase water storage capacity” in that area, the association said in a release.

Rain barrels were added to the gutter, to capture roof runoff and to water gardens and flower beds, thereby keeping additional water on site. Much of the water shed by the sidewalk and the rook has been redirected into the new garden area instead of being sent into drainage swales.

The area now treats twice as much area of runoff from the library roof than the area of impervious driveway that was taken out before that water flows south to Thorp Brook.

“The library was an ideal site as a highly visible public space that showcases solutions that can easily be implemented by most homeowners,” the release said.

The Lewis Creek Association hopes the library rain garden will help the public better understand the problems associated with stormwater’s affect on streams and the lake.

“Come see how beautiful a bio-retention area can be and how big a rain barrel needs to be to catch a half an inch of rain off the roof area,” the release said.

The association advocates for “the three S’s“ of stormwater mitigation “slowing water down, spreading it out and sinking it into the ground.”

The Lewis Creek Association has several videos about the problem of wastewater runoff and what to do to improve water quality at lewiscreek.org/water-quality-videos.