PBS at Shelburne Museum appraised as a success

If you were in Vermont last week, you couldn’t miss the news — in its 27th season, PBS’ Antiques Roadshow stopped for the first time in the state. Photo by Juliann Phelps. An appraiser is filmed by the production team as he talks about a framed letter from and photo of Albert Einstein.

The show’s premise is compelling: Bring an item to the Roadshow and have it evaluated by an appraiser. Perhaps it is a priceless antique — or more commonly — perhaps it is priceless to you. The stories behind the items round out this beloved and popular series.

The Shelburne Museum’s transformation from a sleepy landmark to a set location for this long-standing television show was nearly overnight. Large white event tents rose from the grounds, signs went up and traffic started flowing promptly on the morning of Tuesday, July 19.

“We are total Antiques Roadshow geeks,” said Lucy Thayer. She and her husband were recipients of the tickets given out by the Clemmons Family Farm. They not only attended the event, they attended a reception the night before, which featured an armchair conversation with Antiques Roadshow executive producer Marsha Bemko. 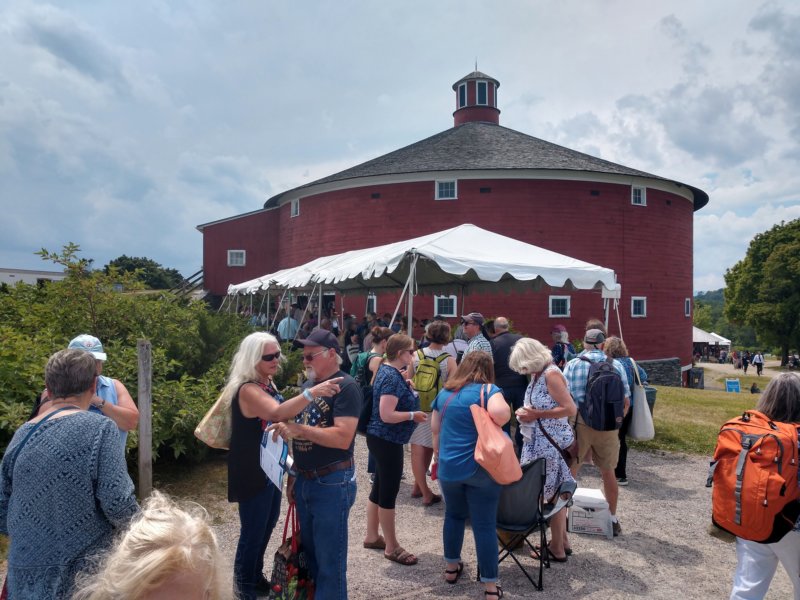 Photo by Juliann Phelps. Roadshow attendees line up at the Shelburne Museum Round Barn for the furniture category.

Thayer said the night before Bemko had told them that attendees the next day might be filmed if the appraiser stopped them and said, “Do you mind if I call a producer over?”

Thayer brought art deco Tiffany jewelry she inherited from a family member, and her husband brought his great-grandmother’s mantel clock. And while she knew the approximate value of the jewelry, they learned a lot more about the family clock.

“The appraiser knew everything about it, he was very knowledgeable,” she said.

It was clear the show’s organizers had their process down to a science. Attendees queued in a triage tent where their two items were reviewed by a general appraiser and categorized.

Once you received your category tickets, a volunteer would direct you to the corresponding location on the grounds. Prints and photographs were located in the Circus Building; furniture in the Round Barn.

Depending on the entrance time on your tickets and what you brought, queues and wait times varied. For example, there was no wait to have a book appraised, but it was over an hour to have a print appraised. When it came time to have your item appraised, the appraiser handled the item, asked how you acquired it and shared historical information about the item along with an estimated appraisal value.

My first illustrated edition of John Steinbeck’s “The Red Pony” was worth $250, and my unsigned lithographic print had no identifying marks but was noted to be over 100 years old and likely from a department store.

Several filming locations were visible, including one next to the carousel. These sets were where the production crew filmed the owners of an item as they shared its history, and the appraiser revealed the estimated value.

There was a “feedback booth” where attendees ad-libbed on camera about their experience. Roaming production crews filmed visitors with their items.

The post-production team at Antiques Roadshow will create three episodes from the Shelburne Museum location airing in 2023, including clips for the “Junk in the Trunk” show.

Lydia Clemmons, president and executive director of the Clemmons Family Farm, shared her experience as she distributed tickets her non-profit received to the Antiques Roadshow. Clemmons Family Farm is collaborating with Vermont Public on raising the visibility of African American art, history and culture.

“Vermont Public called and asked if we’d like tickets,” Clemmons said. “My first thought was to offer them to our artist network.”

She was able to give out about 40 tickets to their network, noting the lack of African American art and antiques featured on the show.

“Then I thought, we can do more. I’d love to give them to Charlotte residents, so we asked for 100 and we got them,” Clemmons said.

Speaking of another attendee who brought an African American artist’s photographic work to be appraised, she said, “The only way to generate value, to appreciate art, is by showing it.”

Clemmons said she’d heard stories about the items residents were planning on bringing if they were given tickets to the Antiques Roadshow: “I love the storytelling aspect. My parents’ collection is all about the stories. The art is beautiful — but it’s also the stories behind the art.”