A group of about 60 gathered at a barn on Greenbush Road to celebrate a new purpose for an old structure on the afternoon of March 26.

Senator Patrick Leahy (D–Vt.) joined the group to celebrate the $500,000 he had helped secure to renovate the barn, known as the Big Barn, into an arts center on the Clemmons Family Farm. 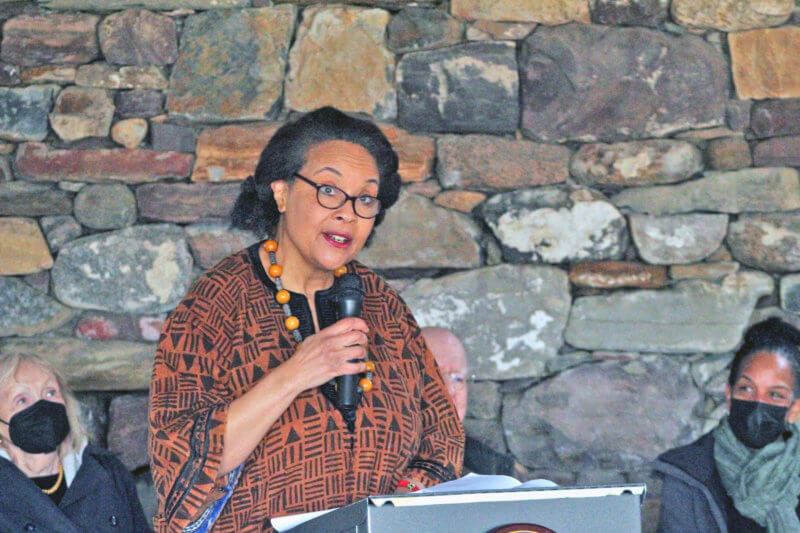 Photo by Scooter MacMillan. Lydia Clemmons said that growing up she would enter the barn at 5 a.m. before going to Charlotte Central School and be greeted by a chorus of jubilees shouted in the multiple languages of cows, ducks, chickens, pigs and horses: ‘That has to be one of the very best ways to start your day, to open a door and walk into a room where everyone is so overjoyed to see you.’

The funds were part of a $1.5 trillion 2022 Omnibus Appropriations bill President Joe Biden had signed a week and a half earlier to fund the government for the rest of this fiscal year.

In her introduction of Leahy, Lydia Clemmons, director of the Clemmons Family Farm, noted that the farm was established by the McNeil family in the late 1800s, the same family that started the first ferry in Charlotte in the 1700s.

“That ferry was apparently connected to the Underground Railroad,” Clemmons said. “In the late 1700s in Vergennes, Ferrisburg and right here in Charlotte, Black American farmers were establishing farms and farming until the mid 1800s.”

When her parents bought the farm in 1962, there were no other Black farming families around.

“This farm where we’re sitting today is one of the rare Black-owned farms left in the United States. It is one of just 0.4 percent,” Clemmons said.

Her father, Jack, and mother, Lydia Clemmons, are now 99 years old, she said. Over the span of their life, African Americans nationwide have lost 93 percent of their land assets.

“Lost,” she said, “is really a polite euphemism for having our land assets stolen through very discriminatory policies and practices.” The money Leahy helped get for the Clemmons Family Farm is part of $170 million he helped get for projects across the state of Vermont. The appropriation to the 146-acre nonprofit farm will be used to turn the Big Barn into space for performing and visual arts and to renovate another building, the Authentica Art Gallery, into a space for artist residencies.

In his remarks Leahy said he was sure Judge Ketanji Brown Jackson would be confirmed as the first Black female member of the Supreme Court, calling her “one of the most extraordinary people he knows.”

He said the nomination was important because it was time for the Court to reflect some of the rest of America besides white men.

The African American Civil Rights Preservation Grants program was started years ago and appropriated funds across the United States, Leahy said. The money going to the Clemmons Family Farm “is going to be the first use of the program here in Vermont.”