How Passion Overcomes Adversity – A Tale of True Grit

Normally, I like to use this venue to espouse the virtues and spiritual connections through hunting, fishing, foraging, and generally learning to find joy through immersion in the outdoors. But once in a while a story needs to be told of a particularly remarkable feat of an individual. I was recently assigned to write about such a person. I think that this kind of story needs to be told to recognize the innate healing power of joy and tenacity.

This past spring a young man with a passion for the outdoors- and particularly fishing- for a brief few weeks met a challenge that many of us would have met with despair. But this young man chose to overcome this painful and frightening obstacle to rise above it and prove that he is much more than what happens to him. He is a True Outdoorsman and worthy of the recognition that the Lake Champlain International Fishing Derbies have bestowed upon him. 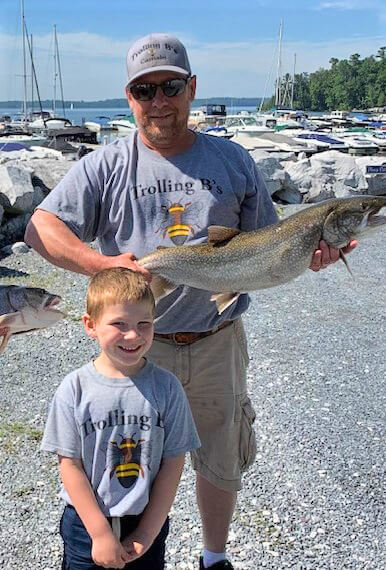 The Bond of Fishing with Passion – The Lake Champlain International Fishing Derbies. Photo by Bradley Carleton.

His name is Zachary LaFountain. He is 13 years old and lives in Essex, VT with a wonderfully supportive family that acknowledges his love of fishing and promotes his passion. Zack began fishing at the age of three years old with his father’s grandfather, who he referred to as “Pep.” Pep taught him the fundamentals and ignited his love of fishing. When Pep passed away, Zack was only six years old, but the appreciation for fishing had already taken hold in this young man’s spirit.

According to his mother, Renee, Zack has never been a morning person. Except when it came to an opportunity to hunt, fish, or gather sap for his boiler.

Zack’s passion for fishing had taken him and his family all over the country in search of new species. He has been to the Dominican Republic and caught mahi-mahi, Hawaii for rainbow runners and peacock bass, amberjack and snook in Florida and of course, salmon in Pulaski and striped bass in the Hudson River. Every year his family would plan a vacation and always planned at least one day of fishing wherever they went. When I asked him what his favorite fish was, I was pleased to hear that it was a fish native to Vermont – the yellow perch. I asked him what he loved most about fishing and he quickly blurted out “the feeling of a bite on my line and then reeling it up”!

Everything this young man loves most about life was fishing. He never expected that one day, soon, his passion would be tested by overcoming great adversity.

On May 14 of this year, he met with an unfortunate accident that easily could have ended his life. He and a friend had been learning about a new spearfishing rod and were planning on trying it out on frogs. Then the idea of trying to knock over a cornstalk came into their imagination. As his friend swung the spearfishing rod around to aim at the fibrous form it accidentally discharged and the spear and the rod went into the right side of Zack’s skull, penetrating approximately 1-1/12” inches into his brain. His friend was in shock and Zack asked him to get him his phone so he could call his mother. They were on the backside of about seven acres. His mother rushed to the scene and called 911. He was transported to the hospital with paramedics still holding the rod to the side of his head so that it wouldn’t move and cause further damage. After several hours of operations, the doctors were able to remove the spear by sawing a hole in his skull, removing the spear from the bone, and then patching it back up.

Once it was determined that the surgery was a success and that it appeared there may be few side effects, the race to heal was on. It was only five weeks until the big LCI Father’s Day Derby that Zack had planned on fishing with his father, Brad, and his mother, Renee. This is where the test of true grit comes in. In a five-week period, Zack was determined to overcome this significant setback with courage and optimism. His passion for fishing was far greater than his pain and suffering. He knew that he just must be ready for the Derby. And fish he did!

It is this valor and tenacity that makes Zack the obvious winner of this year’s “LCI Sportsman of the Year,” It is an honor to have been asked to tell Zack’s story and I hope that anyone who meets this extraordinary young man is inspired to “fish on”!

Bradley Carleton is Executive Director of Sacred Hunter, a non-profit that seeks to educate the public on the spiritual connection of man to nature.