Working out before dawn at Champlain Valley Union High School The morning light is indecisive, still introspective, unsure about whether to go ahead and be a full-fledged day. But downstairs under the main floor of Champlain Valley Union High School in the fitness center it’s high noon, filled with music pumping and shouts of encouragement — even though it says 6 a.m. on the wall clock.

Around 20 athletes come to these morning sessions on Mondays, Wednesday and Fridays, two hours before school starts.

Merola smiles about the previous day’s lacrosse victory. As he prepares to join the steadily growing group of athletes straining at the various weight machines, Merola and Fleming go over details from the Redhawks’ 15-0 shutout of Mount Mansfield Union the day before, June 2, in the first round of the boys state playoffs.

“I love the goose egg,” Fleming says. “I know we know how to score, but what was that? The second shutout of the year?”

Fleming is learning center coordinator, head football coach and fitness center coordinator, but more than all those job titles, he is the enthusiastic supporter of everything Champlain Valley Union High School. His omni-present smile fills his face which is appropriate because the name “Rahn” means song of joy in Hebrew. 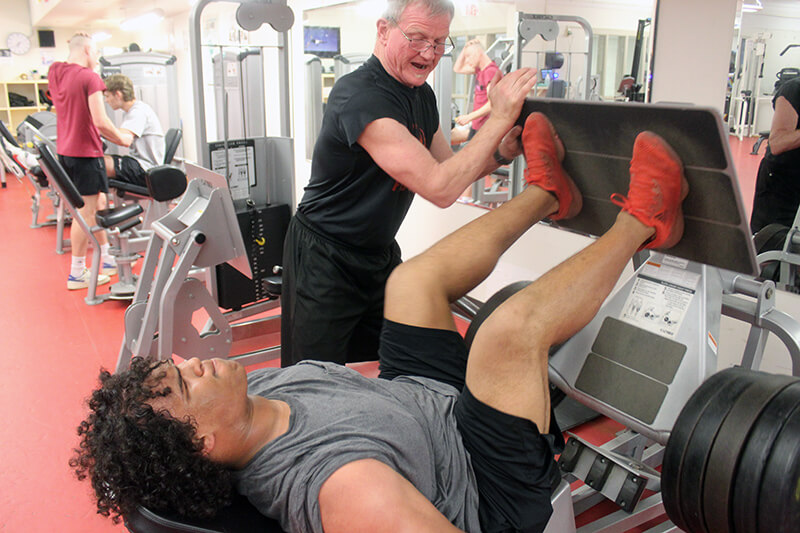 Photo by Scooter MacMillan. Kenyon Thompson of Hinesburg gets encouragement from Rahn Fleming as he works out on the hip press.

Two years ago, Fleming was the students’ choice to give the faculty speech at the remote graduation at the Champlain Valley Fairground, and he cried as he spoke. “How could you be in the presence of folks like this and not cry?” Fleming says.

He interrupts himself and hollers across the room, “Get it, Kenyon. Come on. Try. Try.”

Kenyon Thompson transferred to Champlain Valley Union High School a year ago. He had never lifted weights before. Since the transfer, he’s lost 100 pounds and is a good size for a defensive tackle.

“Coach, we need a bigger room,” shouts assistant football coach Chris Destito, joking because Thompson’s gotten four reps at the heavily loaded bench press. The massive weights look like together they weigh more than a Volkswagen.

Destito says the boys come in early and “really get after it. They’re really good kids. They are all really pleasant, hard-working guys.”

Both of the coaches emphasize that the aim of these workouts is not to get stronger, but safer. For example, the goal of an exercise where one of them lies on bench and tries to lift their head while someone pushes down is to build neck muscles. Building neck muscles helps guard against injuries to the neck vertebrae or concussions.

Joining the morning workout is Matthew Trifaro, who graduated two years ago. He started as a kicker at CVU, but moved on to defensive back.

Trifaro is home for the summer from Clarkson University in Pottsdam, N.Y., where he’s seen work as an offensive lineman and a cornerback. He’s back at his old high school, up before dawn has bench pressed its way into the sky, because working out with coach Fleming makes him feel good — and the ambiance.

“There’s something about the smell of this room,” Trifaro says with a straight face.

“There’s a story to every single kid,” Fleming says. “One of my favorite things about this room in particular is every single summer vacation we have little family reunions in here. They come back. Now, they’re grown, and they all have new stories to tell.”

The most important muscle in football is the neck, he says. “If you hurt your neck, you’re done.”

By design, there’s no snatching or jerking of weights in the fitness center.

“We want to take momentum out,” Desito says. “I want them to move the weight.”

So, instead of suddenly thrusting the weights up, the boys lift and lower on a four count. The exercises are designed to emphasize the importance of lowering the weight or “the negative part of the exercise,” which is where the majority of strength conditioning comes from, Desito says.

“Beautiful range of motion,” Fleming shouts from another side of the room, soloing above a symphony of grunts, gasps and strains of strain against an overpowering backbeat of music that’s not quite rap, not quite heavy metal, definitely not pop, but which features a steady, pounding, relentless and irresistible rhythm.

Love it or hate it: It’s the rhythm of motivation. Or to paraphrase the old song: “In the fitness center, it don’t mean a thing if it ain’t got that bomp jiggy bomp jiggy bomp bomp, bomp.”

Fifteen minutes just standing in the CVU fitness center with the music up loud and you’re ready to try lifting a Volkswagen. Or a defensive lineman (with his permission of course).

The early morning workouts “boost my serotonin for the rest of the day,” says sophomore Charlie Taylor, who plays lacrosse and football and is wearing a T-shirt with the slogan: “More than an athlete.”

He feels more awake in his first class and happier for the rest of the day.

Fleming says the aim of these fitness fests is to have the boys growing tougher physically and mentally, so they’ll still be in the game late in the fourth quarter. Or the final period or the home stretch or whatever sport or life challenge they’re wrestling.

He says this news story should focus on the boys and not be about him.

However, when Fleming is on the other side of the room, coach Desito says the strength conditioning program has gotten so much better “because of that man. He’s the nicest man in the world.”

Outside the parking lot is mostly empty too with the sun struggling to do its daily push up and straining for a brightness to match Rahn Fleming’s smile.